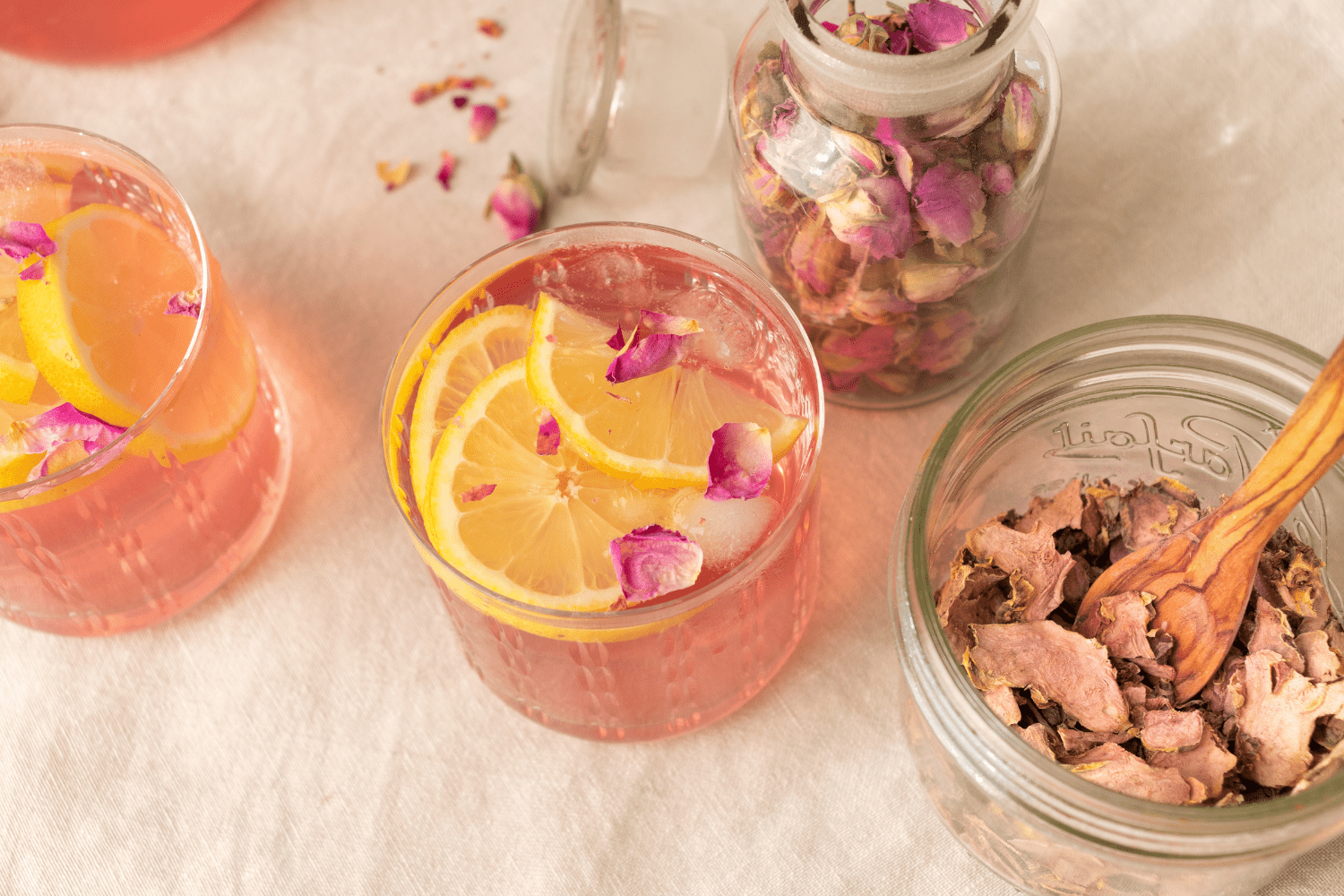 Medicinal plant with a mystical past, rhodiola has enhanced legends and tales since time immemorial. Known to be at the origin of the legendary Vikings’ strength, but also for having been the well-kept secret of a great Chinese emperor, it has been used throughout history in Iceland, Sweden, Ukraine, France, Russia, Greece and Central Asia.

Used for centuries in traditional Chinese medicine as well as in Greek medicine, rhodiola is deeply rooted in the Siberian pharmacopoeia and culture (its homeland). Renowned for its exceptional properties, numerous clinical studies have shown the positive effects of rhodiola root, especially to fight stress, improve cognitive functions, enhance athletic performance and increase energy.

I invite you to discover this very special plant, recognized for its benefits and whose notoriety has kept growing for the past twenty years.

Due to its rhizome with a golden bronze color, rhodiola is also called “golden root”. The term rhodiola comes from the Greek Rôdôn (rose) or Rhodia and the diminutive iola (small rose, or small root of Rhodes), this illustrates the plant’s common properties with roses.

Actually, when the rhizome is dried it has a scent of roses and it is for this reason that the renowned Swedish botanist Carl von Linné, named it this way in the middle of the 18th century.

Rhodiola thrives in humid biotopes, it is a plant that adapts perfectly to regions that have a cold climate, high altitude, especially in northern Europe, Asia and parts of North America. The resilience and capacity of rhodiola to evolve and thrive in extreme conditions foreshadows its full and dynamic spectrum of benefits for our body.

During its flowering the rhodiola is very pretty and is 20 to 40 cm high. The plant grows in clumps, with a thick stem, long leaves, and yellow (female) or red (male) flowers.

There are over 200 different species of rhodiola in the world, only 20 are used in traditional Russian and Chinese medicines.

In the 1940s, rhodiola was rediscovered by Russian Dr Nicolaï Lazarev (see my article Introduction to adaptogens). Stalin allegedly asked him to find a way to increase the physical and intellectual resistance of the Russian people.

Rhodiola has been particularly tested and used by Russian athletes to increase performance both mentally and physically and to improve their recovery time.

Since the 1960s, rhodiola has been one of the most widely researched adaptogenic plants, notably thanks to the Soviet Union.
This plant was officially registered in 1969, in the Russian pharmacopoeia, as a remedy that can be prescribed in the same way as conventional drugs. It is considered to be an adaptogenic herb capable of increasing physical endurance and overcoming stress, fatigue and depression.

Siberia is rhodiola’s homeland, it is part of the culture and history. Roots decoctions have been used for centuries to help people cope with long harsh winters. It symbolized health and fertility; it is said that the root was given to newlyweds before their wedding night.

It was also used regularly to help alleviate fatigue, digestive problems and nervous exhaustion. This plant is so precious that its location as well as the techniques of harvesting and conservation were closely kept secrets within local communities.

The Mongols used rhodiola to treat tuberculosis and pneumonia as well as to prevent illnesses during the long winter months. Tibetan monks drank rhodiola decoctions to help calm their minds for meditation and Sherpas used the root to help oxygenate the blood during high altitude trails.

The use of rhodiola in traditional Chinese medicine goes back to centuries and is known as hong jing tian. It is used to replenish the energy of qi, supporting heart and spleen functions, stimulating mental focus, cleansing the lungs, calming the nervous system and strengthening the immune system. It is also used in TCM for people with general fatigue, exhaustion and for recovery from illnesses.

In France, already in the century of ‘les Lumières’, apothecaries went to look for pink stonecrop in the Alps; widely renowned, rhodiola has been referenced in the famous Encyclopedia by Diderot and Alembert, under the name of “Rhodes root”.

Rhodiola is part of the primary adaptogens, it will allow the body to adapt to physical, mental, environmental stress. (see my previous article on adaptogens)

It is in the roots of the plant that its active consituents are concentrated.

Rhodiola is made up of a multitude of substances, many chemical constituents (flavonoids, terpenes, polyphenols, phenylpropanoids …), the most important therapeutic effects come from the main biologically active constituents: tyrosol, rosavin, rosarin, rosin, rhodioline and rhodioloside (salidroside).

These active constituents are believed to affect the central nervous system to increase focus and improve endurance, acting as a natural antidepressant. A key constituent of rhodiola, salidroside, which is responsible for the plant’s antioxidant properties, has cancer-fighting and antidepressant neuroprotective potential.

Rhodiola acts as a tonic which will rebalance the vital force of the body, having a positive action on all the body’s systems. It will also strengthen the body’s defenses (immune system), it brings vitality and energizes the body to help reduce fatigue.

Rhodiola, like many adaptogens, protects the body from potential damages due to oxidative stress. Oxidative stress can block our biological capacity for detoxification and regeneration, resulting in the inability to eliminate free radicals and the toxicity of various stress responses.

It will help to age positively, with a lively, calm, focused mind, a strong and balanced body, especially when it is confronted with the stressors of life which have a negative effect on mood, sleep, appetite, energy.

Rhodiola is also balancing, it can be both emotionally and cognitively soothing, depending on the body’s needs. It can help keep you alert and improve memory and mental clarity, which means it can come in handy before a period of exams or heavy workload. In addition, rhodiola increases serotonin, a neurotransmitter that, among other things, affects sleep, mood and appetite. It can also have blood sugar regulating effects, helping to stay balanced.

Many research has shown antistress, antianxiety and adrenal fatigue prevention properties. Indeed, rhodiola has shown impressive results for people suffering from fatigue related to stress and is particularly indicated for those who have acute exhaustion associated with chronic stress. Since rhodiola is able to increase mental performance, in particular the ability to concentrate while decreasing the cortisol response, so it will prevent burnout with fatigue syndrome.

It is also believed to have some aphrodisiac properties; this may be due to the positive effects on the hormonal system, or its ability to stimulate energy and reduce fatigue and the fact that it facilitates blood circulation.

Rhodiola is a plant recommended, for individuals who do a lot of sport and fitness as well as high-performance athletes, as it is known to improve abilities, physical performance, as well as stamina and recovery post training or exertion.

How to use it & where to find it

In Russia, rhodiola is used in different ways: jam, herbal tea, elixir, fruit paste. In Eastern Europe you can easily find syrup made from rhodiola rosea.

Rhodiola rosea can be found in the form of capsules, powder, dried roots, used in decoction, maceration, extract and tincture.

Rhodiola can be used as an infusion, it is quite astringent and its taste can be bitter, it can be better to combine it with a sweet herb (as in the recipe below).

Other herbs that nicely pair with rhodiola: saffron (to enhance the antidepressant effect), thyme, licorice, astragalus, schisandra, ginger and ginseng (to enhance the energizing effect).

Rhodiola, like most adaptogens, can be taken as a cure. It is advisable to consume rhodiola a few weeks before the beginning of a period of stress or exertion and continue throughout this period.

You can find rhodiola at your local herbalist, in the form of dried roots or in tincture and also in powder form. It is also easy to find it in organic stores in capsule form.

Finally, spring is back, the season of rebirth, the opportunity to breathe deep again and relax while preparing this fresh lemonade, with rhodiola rosea and rose. A refreshing and invigorating beverage.

You can also add other adaptogens like the blends from a brand like Hygée: Energie, Concentration and Immunité.

This drink is to be consumed in the morning and until 2 p.m. (beyond that it can cause insomnia). You can keep it in the fridge for two days. (Not suitable for pregnant and breastfeeding women.)

To prepare a rhodiola root herbal tea, which is called Siberian herbal tea, you can follow step 1, then remove from heat, pour into an isothermal container and let infuse overnight (the extraction of the active ingredients will occur overnight). Drink in the morning, until 2 p.m.