Home / Arts & Culture / The meeting of the divinities – Apollo, between Mystic and Visionary 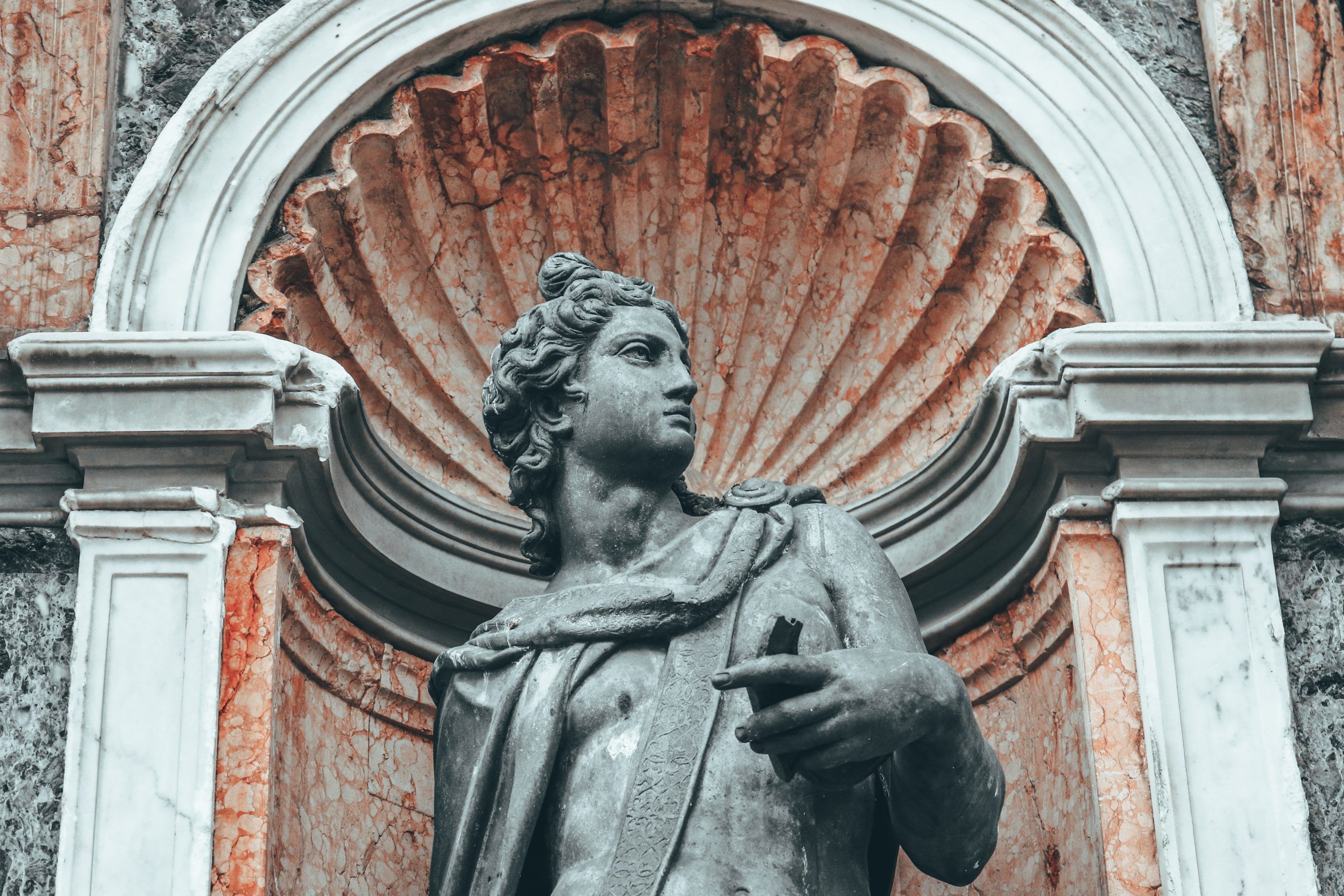 The meeting of the divinities – Apollo, between Mystic and Visionary

Between the bright yellow of the reborn sun, the golden mimosa of February, and the blue of the winter sky, it is the god Apollo, with the youthful features of a young man, that we will encounter during this meeting of the Divinities.

Apollo is the god of the sun, the arts and occult knowledge. He is gifted with healing, prophetic and divinatory powers, and the cult of the Pythia in his sanctuary at Delphi is very famous all over Ancient Greece.

This solar god, brilliant, often represented with dazzling golden curls, is close to Brigid, among the Celts, and shares with her the same abilities.

We can also associate to Apollo the talents of the visionary and the creative: the procession of the 9 Muses is an innovation in the Olympic Pantheon. Indeed, Apollo is the only god who entrusts women with the power to be the guardians of different creative and artistic fields.

He is also the twin of the independent Artemis, he is closely related to her since birth when the young goddess helps their mother, Letô, to give birth to Apollo, on the island of Ortygia, which will be called afterwards Delos, “The Shining One”, to honor these two divinities born on its lands until then arid and deserted.

Solar and luminous god, Apollo is also assimilated to the god Helios, to light and life. He spreads light and his arrows are perceived as the solar rays of the beneficent star. His chariot allows him to bring light in the different regions of the universe.

But beware of his ambiguous aspect: the sun in its sweet comforting warmth after the long months of winter, but also the burning ardor of the sun seen as its evil and murderous arrows. He has the same ambivalence as Brigid, sweet and cruel at the same time.

Let’s not forget the affair with Cassandra, the prophetess who tells the truth but whom the god punishes by never being believed again for having rejected the beautiful ephebe that is Apollo.

And what can we say about Daphne that Apollo metamorphoses into a laurel tree, so that the young nymph remains eternally attached to him by becoming his fetish plant, because she fled from the god’s amorous proposal?

Apollo, the god of the returning light...

He retires every year, in winter, to the Hyperboreans, a very cold and dark country, located beyond the Boreas, the North wind, (the actual Russia), and returns from his hieral retreat, to celebrate the new year with this month of February, which, etymologically, means “purification”, and which brings step by step the return of the stronger and more lasting light. It is like the one who comes out of the tomb to rush towards the blossoming, the light of renewal…

Apollo, the healing and purifying god, who spreads his light on humans, animals and plants, works hand in hand with Brigid. Both have a close link with the earth, which needs to be composted before being reborn and coming to life.

Apollo is also a nocturnal, dark god, whose etymology [apollunai] means “who causes death”. He can be ruthless, ferocious, and cause sudden death: he does not hesitate to kill Coronis, his young unfaithful wife, by tearing out of the flames the child she was carrying, the god Asclepius, who will become the god of medicine.

He kills twelve of Niobe’s children who dared to pride herself on being more fertile than her mother Leto.

He can also transmit epidemics such as the plague that struck the city of Troy.

Apollo has his dark side and must deal with it in a fair balance to go only to his light side and kill to restore the balance.

As when he kills the serpent/dragon Pythô who devastates the city of Delphi: Apollo kills the representative of the underground and dark forces of the Earth, then he purifies himself near the source Castalie and will make of this place his sanctuary by becoming the tutelary and polite deity.

He installs there the Pythia who transmits the oracles of the god by entering in deep trance after having ingested wild laurel, and inhaled the sulphurous water vapors which emanate from the ground.

The god says thus “I” by the mouth of this Priestess.

The oracles of Apollo make it possible to know the cause of the evil and its remedies. He is the god of clairvoyance and prescience: the author Herodotus said that Apollo “knows everything, the number of grains of sand as the dimensions of the sea.”

His knowledge is vast and extensive as the universe is.

The philosopher Plato will define him as the god of celestial and terrestrial harmony, he possesses the rhythm ” which makes move together the celestial bodies, the solar rays and the sound of his lyre “.

Apollo is the guarantor of the good foundations of a new city and of good legislation: he ensures that the new beginning is built on solid foundations that the Goddess Hestia was able to lay in January in the hollow and softness of winter.

Like a well-tuned music, he ensures eurtyhmia, the right rhythm in Greek, harmony, concord and peace among citizens.

Ancient goddess of Brigid, guardian of the voice and poetry, Apollo is the god of sensibility through words, through poetry, through sounds, through music and song, he is the one who leads the 9 Muses, he is thus called Apollo Musagète.

He is also the father of Orpheus, the ancient poet and enchanter who, through his voice and his melodies, carries anyone who hears him between worlds.

Another point in common with Brigid is that Apollo is a Guardian God of flocks, herders and shepherds. Close to nature, he is the protector of wheat and is often represented in Sparta as a ram god, called Apollo Karneios.

Apollo in all his ambiguity, as much solar as tenebrous, terrestrial as celestial, reborn as funerary: he is a real bridge between the seasons of winter and spring.

Apollo is as much “Brilliant and Dazzling” as “Terrifying” in his epithet “Phoibos”, “the one who creates fear”, who shakes the ground with his footsteps, his bow ready to shoot powerful arrows.

Apollo, the eternally handsome young man, with long curly hair floating in the air, between femininity and masculinity.

Apollo, the god of the sensitive, the poetic, the musical.

Apollo, the deceived in love as the wounded in losing his lover Hyakinthos, who will become the hyacinth.

Apollo, the god of balance, of harmony, between Heaven and Earth, like every human being in search of this fair and harmonious balance, in search of stability and beauty.