Home / Arts & Culture / The Meeting of the Divinities : The Goddess Hestia 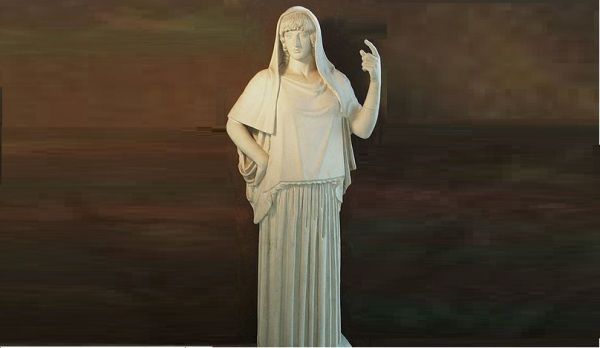 The Meeting of the Divinities : The Goddess Hestia

“In the depths of winter, I finally learned that within me there lay an invincible summer.”- Albert Camus

In the middle of winter, the month of January is a bridge that allows us to sweep away and erase the old of the past year by entering the new year with a blank page that opens in front of us, leaving us master of what we will write on it…

The winter season falls in the line of two female archetypes, explored with Alexandra Fryda Marty of Moonsistersparis: the Wise Woman and the Midwife, also known as the Doula, from the ancient Greek [doulè], the slave confidante of the housewife, who took care of her and surrounded her with solicitude when she was pregnant and about to give birth.

Many divinities can be assimilated to these two Archetypes to accompany us on the path of winter while maintaining the flame that will know how to guide us, enlighten us and keep us warm.

Hecate is, among them, a Goddess, who maintains this bridge between light and shadow, between the underground and the earth.

But for our rendez-vous, I have chosen to talk to you about a lesser known Goddess, one who is more in the background compared to other famous divinities. However, Hestia is far from being a less important Goddess, on the contrary, she is at the heart of winter, as well as at the heart of domestic, civil and religious life.

So why and how do we link the Goddess Hestia to these two Archetypes that close and open the year?

First daughter of the Titans, Cronos and Rhea, the goddess Hestia was the first to be swallowed by her father at birth. She was also the last to be spat out by him, after having absorbed the vomiting potion that Zeus made him swallow. She thus remained longer in her father’s entrails.

As the eldest of her siblings, she is highly respected and revered by her brothers and sisters.

She is always served first at sacrifices or banquets. And in the domestic sphere, at meals, she is the first one to be honoured by invoking her and offering her the sweet wine at the beginning and end of the meal.

Hestia is therefore the Goddess of passages and thresholds, opening and closing, as the one who ends the year with the Wise Woman and begins the new year with the Midwife.

Refusing the pressing advances of Poseidon and Apollo, she asks Zeus to let her decide and control her life by remaining solitary and chaste. Zeus grants his sister’s dearest wish and in return grants her a central place in domestic and civic duties and tasks.

Indeed, Hestia will have a crucial role, in the household, called “the navel”, which is related to the prominent navel of a pregnant woman, during the seventh month of her pregnancy and at the moment when the umbilical cord is cut until it falls: Hestia, dedicated to virginity, occupies the master place of fertilisation, her place of residence being in this domestic and then public, civic and religious navel.

The Goddess Hestia, determined in her life choices, is a totally independent deity, like Artemis and Athena.

Consequently, she asserts herself with a masculine attribute, the royal sceptre, instead of the distaff and spoon, symbols of the married woman and the mother.

Guardian and Patroness of the home, the Goddess Hestia watches over the flame of the home that stands at the centre of the hearth and the centre of the house. One of the sources regarding the etymology of her Greek name Hestia corroborates this primordial function by telling us that [istiè/estia] means ‘hearth’, ‘the base where one feeds and warms oneself’, and her Latin counterpart Vesta is said to come from the root *wes/*vas which means ‘to burn’.

She occupies the most important function of the home: watching over the fire that warms, feeds and enlightens us…

Hestia’s duties do not end there, but include important roles such as presiding over festive meals, deciding whether to allow a supplicant into the intimate space of the house, and also ensuring the proper and just transmission of the family estate.

Moreover, Hestia stands at the heart of the city, she is the only Goddess at the Prytanae, the central focus of the city where the magistrates sit and make decisions. Pindare, a Greek poet, refers to her as “the Patroness of the Prytanae”.

She watches over the fire that burns there and that must never be extinguished or the whole city could perish. She is the guardian of the continuity of civilisations.

The Goddess Hestia embodies great wisdom, she balances the atmosphere of the home as well as that of the city, she cultivates the values of hospitality, generosity, and comfort. She is serenity itself, for she takes no part in the conflicts that agitate Olympus, and she knows the changing nature of beings and things.

This wisdom and serenity give her inner peace and stability.

Hestia represents the Wise Woman in her knowledge of the vicissitudes of life and beings.

Gods and men alike often turn to her in times of trouble or uncertainty, for she brings everyone together in her gentleness and patience to await the answer that is being woven, without ever forcing or rushing it. The Wise Woman is clearly present in Hestia.

Her status as Guardian of the Sacred Fire extends to Delphes, the place considered the centre of the Greek world, and where the sacred flame, over which Hestia watches with great vigilance, burns in the common hearth of all Greece.

Hestia is often seen as an austere and rigid Goddess, who does not move or change her place, often remaining draped in her solitude and in her economy of words. She is not very present in the texts or in the statues that represent her. But just because she is rarely mentioned and therefore very discreet does not mean that she is a Goddess without impact or influence. She occupies a major place in the rituals of daily life and in the key passages of life, the mysteries of which she knows, like the Wise Woman.

The Goddess Hestia, linked to the comforting aspect of fire, animates the house with her warmth and invites us to turn towards the inside of our home and family life. She is a true companion in the transitions and passages of life. Thus, Hestia naturally puts on the stole of the Midwife who leads to life, with mastery of gestures, with patience and with reliability.

An ancient ritual, called Amphidromia, literally “running around”, consisted in presenting the newborn child in front of the flame of the altar of Hestia, after having made him go around the house, carried in the arms of his parents.

It was through this sacred ritual that Hestia recognised the baby and following this ritual, its parents gave it a name: the Goddess thus participated in the recognition of the child and guaranteed its existence.

One of the main plants associated with Hestia is lavender, whose etymology means ‘to wash’, ‘to purify’, and indeed, midwives used it to disinfect the water used for childbirth, for washing the mother and her baby, and they waved dried lavender flower stalks over the embers of the fireplace so that the soothing and comforting scent would fill the room during childbirth and serenely welcome the newborn baby when it arrived.

In the same way, at the time of the marriage and the foundation of a new house, a part of fire was taken from the paternal hearth and the hearth of the original city to give birth to a new one, symbolising the beginning of life as a couple in a new habitat. It was the same for the foundation of a colony: it was fundamental to always place this birth of life under the benevolent and protective guardianship of the Goddess Hestia.

She is the one who presides over the art of building houses and constructing the walls of a new home, which was originally round in shape, symbolising harmony and the free flow of heat. Moreover, the Roman temples that were built in honour of Vesta and her priestesses, the Vestals, are notable for their circular shape.

Hestia, in her aspect of Midwife, allows the couple to settle into their new home under good auspices, participates in the fertilisation in the home through the sacred flame that burns there and is the object of all attention, and recognises the newborn.

She is the symbol of the (re)new that is being written, she gives birth to new beginnings, whether it be the foundation of a new family, a new city, a new colony, or even a new rewritten life: the Vestals in Rome had the power to pardon a condemned man and free him from the death sentence so that he could reinvent a new version of his existence.

Hestia, the Midwife, in the season of Capricorn, which corresponds to the Mythological Goat bringing abundance and prosperity, represented by her Horn of Plenty, which is also the symbol of the Goddess.

She is the Goddess [Polyolbos], ‘of many gifts’, bringing prosperity in the new year.

Hestia, between Wise Woman and Midwife, as the pillar of the first month of the year.

Hestia, Goddess of sacred fire, flame and light, accompanies us on our path, in our reconnections and revelations, in our reflections and understandings: she is our companion at the beginning of this year, Weaver of light at the threshold of the new year.

She invites us to return to the warmth of our home, to nurture and care for it with tenderness, gentleness and protection, to warm our hearts in the depths of winter and to strengthen our inner flame.

« Winter, this season of cold silence, but also of fruitful waiting.» – Stefan Satrenkyi