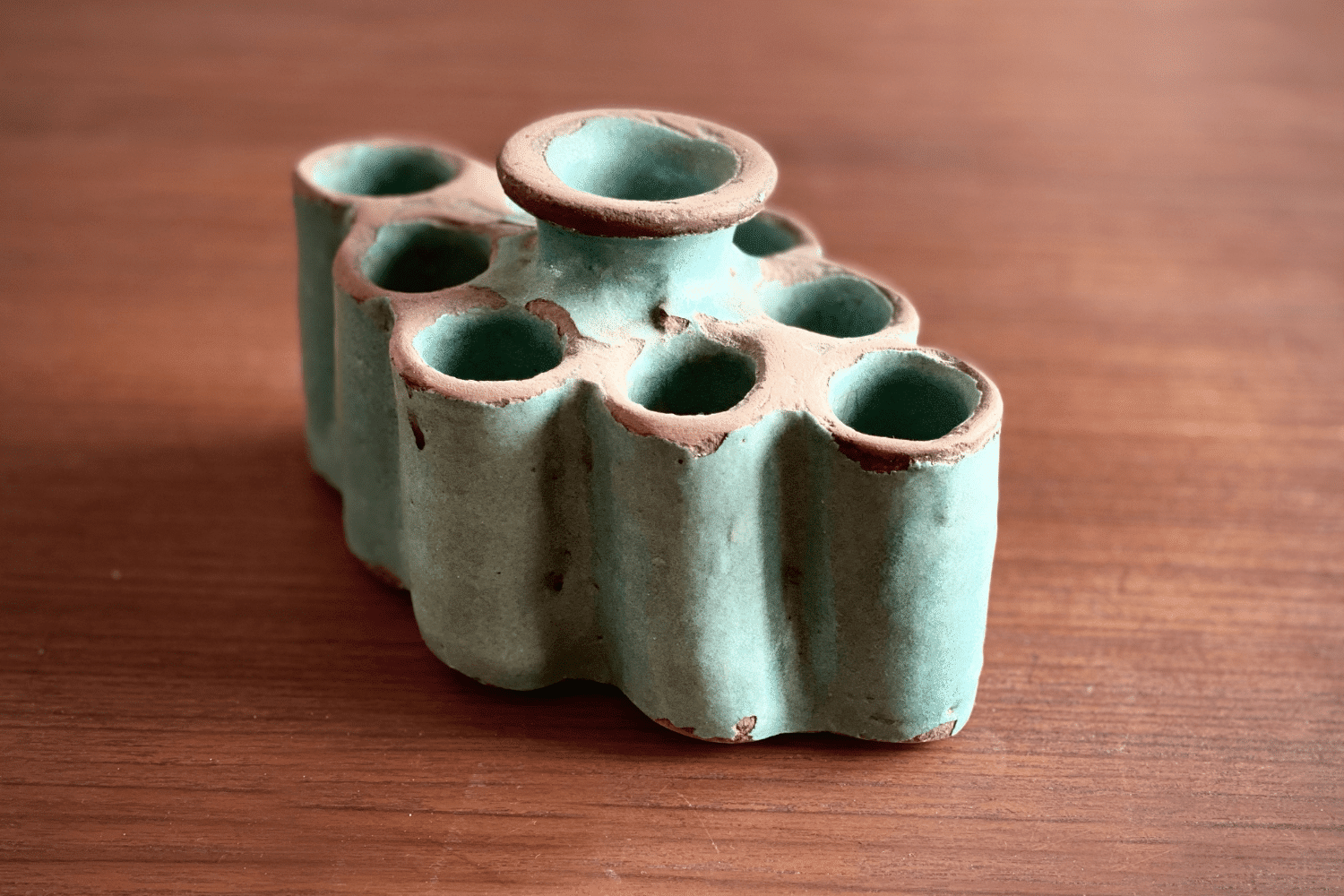 E for an Extraordinary inkwell

To share his thoughts on Beauty, French designer Patrick Jouffret chose to talk about objects created by humans to fulfill their dreams. For Patrick, these objects go beyond fashion and status. They make something functional beautiful, mark chapters in our history, and show how our needs have evolved. Through this subjective selection, which he presents in the form of an alphabet book, Patrick explores the hidden dimensions of these objects – dimensions that make them unique, timeless, and essential. After discovering the letter D for Decorative Trivet Stand, let’s continue this serie with the letter E for… an Extraordinary inkwell!

This object is a traditional Moroccan inkwell, whose origins go back several centuries. Made from ceramic covered with a green glaze, it consists of several compartments set around a wider, taller, central compartment with a flared rim that allows you to hold and carry it. A surprising number of variations on this principle exist, and are known in French as polygodets.

Because these inkwells were originally intended for manuscript illuminators, the quantity, size and distribution of elements would vary according to the number of colors they wished to use.

With the advent of Islam, Persian illumination underwent a major change. Teaching centers were set up, and the ornamentation of the Koran become a common practice. These objects were quite possibly mass-produced and designed to be functional, i.e., they had to take up as little space as possible on a writing desk, be well balanced, easily portable, and able to hold the amount of ink required. In modern times, we might apply the same criteria to classroom furniture and ballpoint pens.

The shape of this particular model is quite basic, orginial and unusual. Most Moroccan inkwells are decorated in ways that reflect the craftsmanship of the region. They’re often adorned with patterns, or even designed to look like miniatures of architectural monuments.

If you look at this inkwell from above, you can see that its shape is simple yet sophisticated. There are no excess materials – no frills, so to speak. The outline of the entire inkwell follows the individual outlines of each compartment, evoking a cluster of frog eggs around a reed, or bubbles, or even molecules. The universe tends toward chaos. Organized, structured, symmetrical shapes take us back to the idea of primal order.

Paul Valéry talks about this mysterious attraction in his book, L’homme et la coquille (Man and the Sea Shell): “Like a pure sound or a melodic system of pure sounds in the midst of noises, so a crystal, a flower, a sea shell stand out from the common disorder of perceptible things… They present us with a strange union of ideas: order and fantasy, invention and necessity, law and exception. In their appearance we find a kind of intention and action that seem to have fashioned them rather as man might have done, but at the same time we find evidence of methods forbidden and inaccessible to us.“

Biomorphism, which was rediscovered in the 20th century, is probably the origin of all human innovation.

We could break down the structure of this inkwell into spheres arranged geometrically in three dimensions. Does its aesthetic strength also come from its fractal dimension (a disproportionate enlargement of the infinitely small)? Much like the assembly of molecules, the compartments are assembled in a way that follows the same rules, i.e., to use minimal material and to minimize empty space, in order to be as compact as possible.

For those who once used this inkwell, its exceptional shape will have encouraged learning and concentration. For us looking at it today, it holds the mystery of the past, and tells of a practice that has since disappeared. Nevertheless, its usefulness and the strength of its design remain very much present.

We’ll meet next time to talk about the letter F for Flute!