Home / Learn / The Beauty of Objects : K for Kouglof 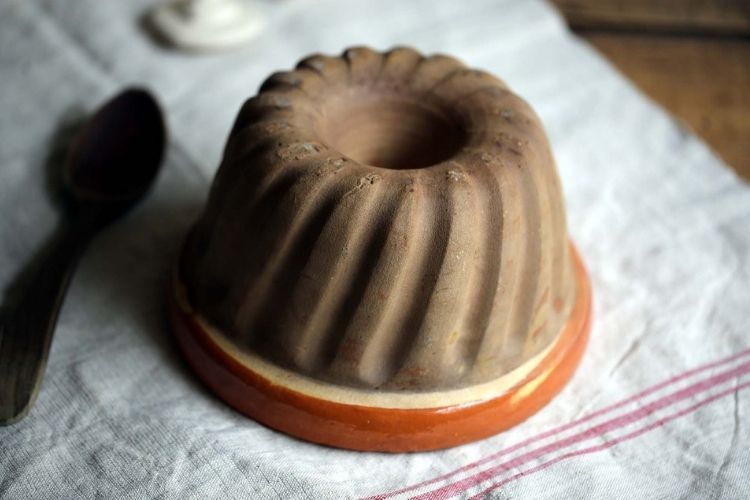 The Beauty of Objects : K for Kouglof

To evoke Beauty, Patrick Jouffret, French designer, has chosen to talk about objects created by humans to fulfill their dreams. According to him, beyond fashions and statuses, they make something functional beautiful, mark chapters in our history, and show how our needs have evolved. Through his subjective selection, in the form of an alphabet book, Patrick wants to explore their hidden dimension which makes them unique, timeless and essential. After the letter J (for Jarre), let’s make way for the letter K… for Kouglof! Objects tell us a story of everyday life and reflect their time.

It is a medium-sized cake twisted in its height, of brown color, with at its rounded top roasted almonds arranged between each of its flutes.

Its features are reminiscent of the alcoves of a cliff, a small volcano that one would look at from above with its empty crater.

The Kouglof is a brioche that comes from Central Europe, Austria or Alsace.

There are as many kouglofs as there are couscous or tagines, but the one that interests me is this soft one, which contains raisins soaked in rum.

Why this shape? The legend tells that the first one was molded in one of the hats of the Three Kings but another hypothesis is that it allows a homogeneous texture and cooking.

The texture is very important. In order for it to be perfect, neither overcooked nor undercooked, the dough had to be distributed at an almost constant thickness. This is the primary reason for the grooves and the central crater. The same principle can be found for most material casts such as clay, aluminum or plastic. If the variations in thickness are too great, then there are problems: shrinkage, cracks, uneven baking of the dough.

To accomplish this, specific molds had to be created and the Alsatians drew on their soil. In Soufflenheim, the local soil allowed them to make thick ceramics that resist heat, unlike the one in Betschdorf, which is more suited to cold and acid.

Once turned upside down, the mold is filled with dough on the almonds previously arranged in the concavities of the sleep. When the little rounded cake belly appears, it is ready to be put in the oven.

The terracotta molds are glazed on the inside to facilitate removal from the mold and their grooves are sometimes transformed into geometric reliefs, and vertical or twisted lines.

In the past, in Alsace, people used to make kouglof at home with their family and the village baker would lend his oven to the inhabitants to bake it. To find his way around he would put a small rolled up piece of paper with the name of the person slipped into the hole at the top of the crater or recognize the owner by the shape of his mold.

By adding variations of patterns to those of shapes, the mold has become a decorative object but also an element of personalization.

The kouglof is one of the few food objects with a unique shape. One can mention the onigiris, the Cannelés (similar), the hamburger or the Madeleine. This symbiosis between constraint and pleasure is so accomplished that it makes the Kouglof a remarkable cake. Its complexity, reminiscent of Greek Doric columns, is a tribute to the beauty of things that do not last.