Home / Learn / Meet the dream illustrator Laura Daniel: “Dreams are an endless source of inspiration for me” 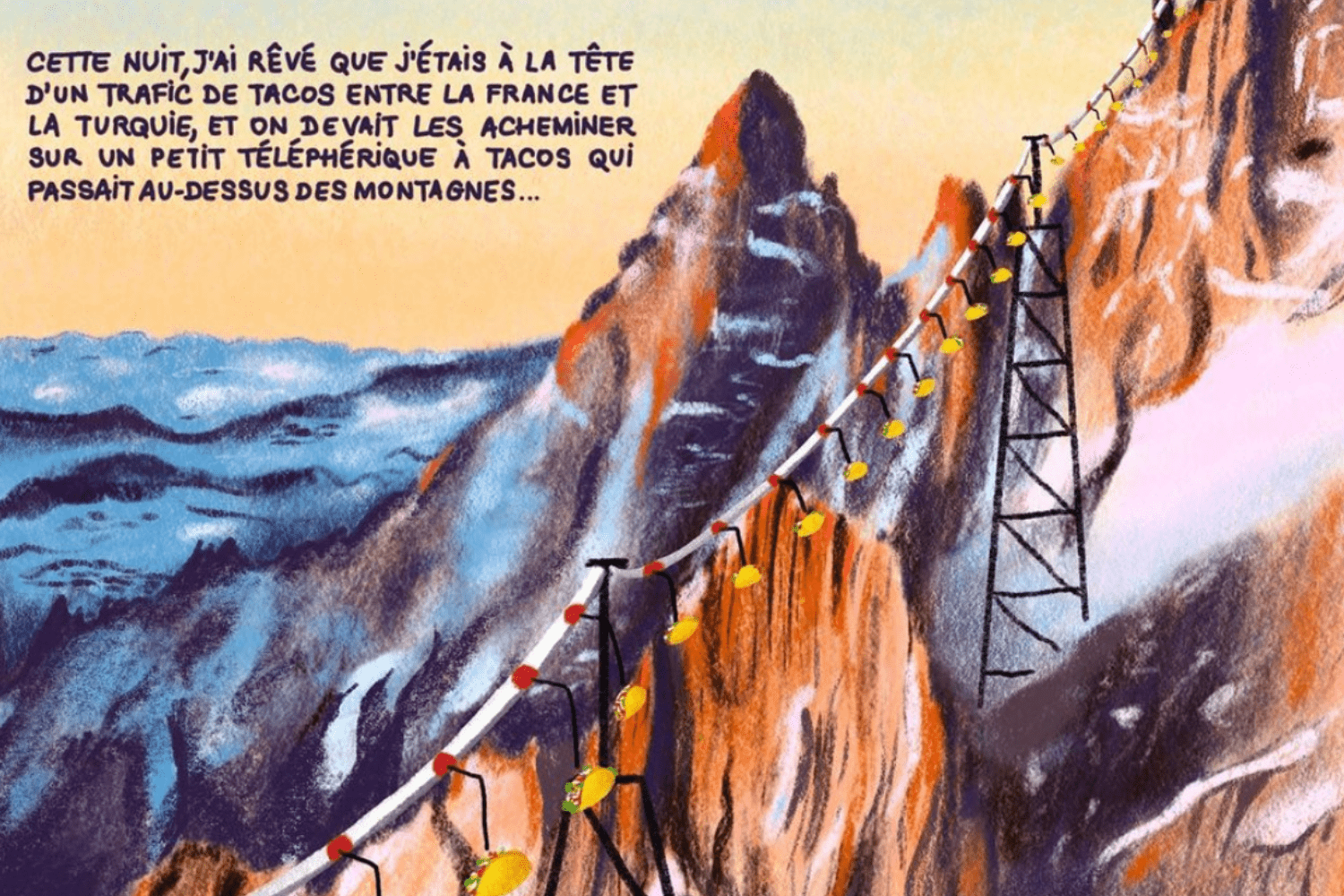 Meet the dream illustrator Laura Daniel: “Dreams are an endless source of inspiration for me”

Laura Daniel is a self-taught illustrator, who made herself known on Instagram (@Laura_disegna) with her series of illustrations “Dreams” and “The Imaginary Herbarium”. It all starts with a text message she received one morning in December 2019. A friend wrote that she had made a dream in which Laura appeared:

“I dreamed I saw you in a café. You were drawing and telling me that you were going diving at Cap Ferret (South West of France) to draw all kinds of shells. That you wanted to take up philosophy again and settle in Apollinaire’s hometown…”

Amused, the illustrator decided to make a drawing of it, a unique canvas on which mingle the terrace of a café, the ocean bed and a fantastic urban scenery. The project was born! “What was just a game became a series. The several hundred of private messages I received on instagram were a great sources of inspiration. I can’t draw them all, but I carefully keep them.”

Because telling a dream to a stranger, who will interpret it in her.his own way, is not a trivial act. “I’m aware that people who write to me entrust their dream to me and so an intimate part of themselves.“

Laura’s drawings are light and funny, as dreams can be. “The perfect recipe for a dream illustration is tricky: you need a short story, with a strong image or that takes place in a striking setting. With this absurd touch dreams have! Only in dreams can Arlette Laguiller (French female politician) appear from behind a bush in the middle of the Andes Mountains on a camel!”

With her own personal touch, a falsely childish line and a poetic work of colors and decor, Laura takes us on a journey into a dreamer’s imagination: “I like to draw things that do not exist.” Spurred by the success of her series on Instagram, she challenges herself to participate to the next Inktober challenge, an international drawing competition that takes place every year in October. Every day for the whole month, she will publish a new drawing. For this new project, she’s developing an imaginary herbarium. Laura’s plants do not exist, nor do the virtues she attributes to them.

“I had seen on social networks photographs of insects viewed under a microscope. I found it beautiful and strange, it inspired me to imagine plants, while letting my pencil follow my imagination. I had a lot of fun finding benefits for each species. It was an experiment with myself, both in the conception and the realization of the drawing,” says the illustrator.

The series is a great success, combining aesthetics with strangeness. “What guides me above all is the creative idea, I want it to be interesting. Then comes the composition and the drawing itself, which must be coherent and harmonious. When one publishes a drawing per day, one has to give up the idea of a perfect rendering. If I had taken more time, I would probably have produced more accomplished drawings, but what interests me is the magic of the gesture and the present moment.“

To reinforce the feeling of freedom linked to drawing, the illustrator never informs in advance those whose dreams she will publish. No make-to-order productions, no pressure, but a guaranteed surprise effect when the lucky one discovers her Instagram post. “I see it as a playground where I can experiment. It is above all a pleasure! I try to be regular in my productions, but it is above all a passion,” explains Laura, whose main activity – within a cultural institution – has little to do with illustration.

It’s in her daily life, however, that she draws her inspiration. “I’m the kind of person who always has a notebook in her bag to scribble in. When I could, I liked to sit on a terrace and sketch passers-by. On social networks, I follow a lot of illustrators but I’m careful not to be too inspired by their work. There is a fine line between copying and plagiarism, especially on Instagram where many are into imitation.“

With more than 10,000 people following her, Laura acknowledges that social networks have changed her way of looking at drawing: “We engage with the gaze of others, it’s a form of positive pressure. I still find it crazy that strangers write to me to tell me they like my work, it’s both adorable and very disrupting! “. On the other hand, the young woman is concerned about preserving her privacy and rarely exposes herself. “It can change the relationship with our community. I can film my hand drawing, or my travel journals, but it would be unnatural for me to speak. I prefer to let my drawings speak,” she concludes.