Home / Learn / The Meeting of the Divinities: Themis and the Autumn season 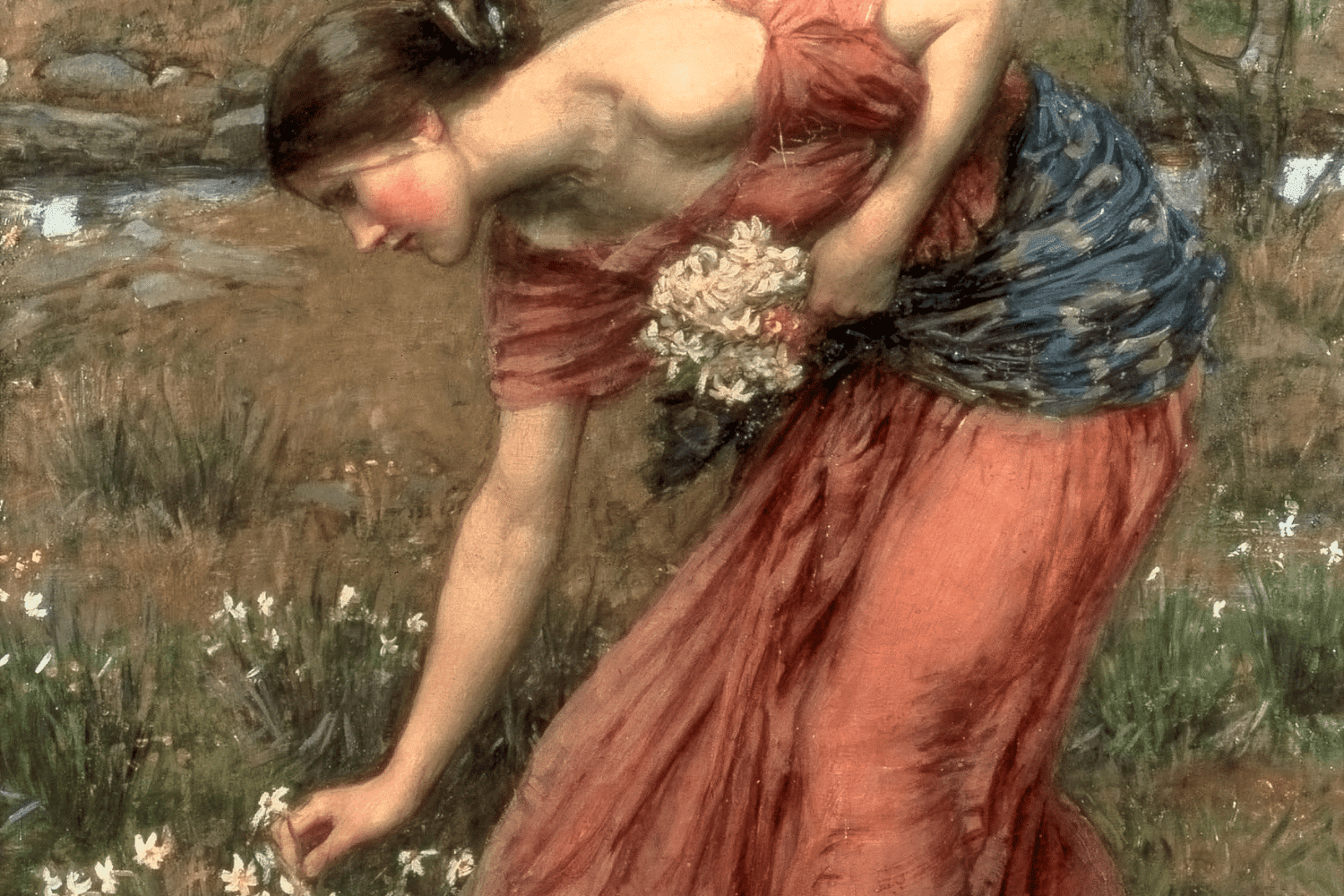 The Meeting of the Divinities: Themis and the Autumn season

The sun is gradually saying goodbye and making its most beautiful bow, the colorful dance of the leaves begins a flamboyant ballet and gradually the silence of Autumn envelops us…

Autumn is not a season that has always existed in antiquity. Indeed, two primordial cycles split the year in two, summer and winter, which corresponded to the cycle of day and night, the abundance of fruits and harvests in summer with the germination in the ground, the secret growth, during winter.

The myth of Persephone, Demeter’s daughter, kidnapped by the god of the underworld, Hades, while picking flowers, is a perfect illustration of this cyclicity. Losing her daughter six months of the year, Demeter sinks into grief; this translates into bad weather, the rainy and cold season, the lack of harvest and the uncertainties of winter. When she finds her daughter during the other six months, Demeter exults in joy and brings back flowers and fruits, it is the season of the reaping of wheat, of abundance, of the grape harvest among many other harvests.

Thus, this very poetic explanation showed the origin of this repetitive cycle of death and rebirth to life.

Persephone contains within her the principle of life; the kingdom of Hades, the underworld, is perceived as the cave, protective and humid, which allows germination in the earth during the colder months, and which prepares the growth, the hatching, and the promise of life in the good days. Persephone’s ascent to the light is the perfect illustration of plant rebirth and flowering.

So, we are in the presence of two main seasons, summer and winter, to which an intermediate season was necessary: that of spring, which makes Greece a garden and which makes it possible to remain faithful to the number 3, so full of symbolism in Antiquity. Under the influence of the Pythagoreans, linked to Pythagoras, a 4th season, intermediate from summer to winter, appears …. And so autumn was born.

It was necessary that after the sparkling luminosity of summer, and before the winter rigor, a transitional passage takes place: passage towards the decreasing intensity of the light, towards the shortening of the day, the cooling of the air…

It is a question of an after-season that we continue to use to designate the beautiful days of summer that are ending in autumn. And in Greek, metoporôn is the word dedicated to this after-season with mét-méta meaning “after” and oporon “after the season”, it is indeed the “season after the season”, the season of figs and grapes, the link between the apple and pear orchards and the wind that becomes more bitter, colder, more hostile. And this is how Opora can be personified by the goddess of autumn.

Opora is described by Aristophanes, in his play, The Peace, as a venerable goddess who gives grapes, she is also associated with figs. She is often in the company of Dionysus, the god of wine and banquets. The goddess of autumn is also linked to a myth of passage that a writer, a poet, delivered to us. Opora is at the hinge, at the transition, at the separation, announcing the winter.

Sirius falls madly in love with Opora but does not manage to seduce her. He is consumed by a devastating fire and this burning ardor becomes that of the star of Sirius, associated with the constellation of the dog, Canis in Latin which gives the heat wave.

Its devastating fire burns and dries up all the crops in the fields. Desperate, the men implore the gods: Boreas, the North wind, sends his two sons, Calais and Zetes, called the summer winds, who calm the burning ardors of Sirius, who help him to seduce Opora and who thus come to the aid of men who can then cross this heat wave and survive it to reach a milder autumn.

The Seasons, these Guardians of the Gates of Olympus, would remove and place a very thick cloud of fertilizing moisture like a morning dew, a kind of cosmic breath that established a link, a connection between the world of the gods and that of men. A balance that was so appealing to the Greeks for whom the harmonious rhythm was very important.

The season, in ancient Greece, is above all the concrete moment, the hour, at which what is right and expected must come. Homer, in his work The Odyssey, refers to the season of spring as “the hour when the leaves and flowers come.” And in this, we resemble the Greeks since we also sometimes count the age of a person in spring to signify their number of years. And it is precisely there that lies all the interest to speak about Themis and her last three daughters, conceived with Zeus and called the Horai, the Hours in the sense of the Seasons: they are the ones who cut time into portions, into seasons, into hours.

In Athens, the Seasons were personified. They liked to imagine them as young girls or mature women, dressed in long frothy dresses, airy, embroidered with flowers, holding, according to the represented season, bouquets, crowns of flowers or plants, fruits, vine branches. Each one was wearing the emblem of the time of year it symbolized: flowers in spring, ears of wheat and a sickle in summer, a vase and grapes in autumn, seeds and reeds in winter.

In the wake of the feminine archetype associated with autumn and the sign of Libra, proposed by Alexandra Fryda Marty, the archetype of the Lady of Balance, the Sacred Wife, or the Queen of Autumn, Themis takes her place in the weaving of Antiquity with Modernity.

Daughter of Gaia, Mother Earth, and Ouranos, the Sky, Themis belongs to the generation of Titans. She sits at the side of Zeus, and makes decisions full of wisdom, after having carefully thought about the consequences of her decision, after having weighed the pros and cons. She is reminiscent of the Egyptian goddess Maat, guardian of justice, order, and truth, with the weighing of the pen and the heart.

Themis is represented blindfolded to symbolize the objective decision, the neutral and impartial choice; she carries in one hand the scales in balance, and in the other hand, the papyrus scroll or, very often, the sceptre, which signifies the clear choice, the decision cut with the sword of discernment. She is therefore assimilated to the sign of Libra, sensitive to balance and harmony, a sign attached to the balanced and just decision, which brings together, which unites, which reconciles the different points of view.

Themis had the ability to make decisions with wisdom and foresight. Pindar, a Greek poet, even called her “the celestial Themis with wise counsel”. She is even said to be the origin of the Oracle of Delphi, famous for its Priestess, the Pythia, the female voice through which the god Apollo transmitted his prophecy.

Themis watches over the respect of celestial and human laws, individual and collective, those that govern the relationship between the divine and the earthly: she unites Heaven and Earth, Spirit and Matter.

The goddess Themis also watches over the balance of each individual, in the precious relationship of oneself to oneself and she invites the harmony between the part of light and the zones of shade that each of us possesses.

We see it: Themis presides over the middle ground, the right balance of polarities, the conformity between the physical and the spiritual, the visible and the non-visible, the manifest and the unmanifest. And this is what this Archetype of the Sacred Wife in Libra proposes to us: to enter into ourselves to seek the balance of the two plateaus between darkness and light, between yin and yang, to understand our truth…

Finally, Themis watches over the return of unity in times of conflict, by inspiring wise decisions, well thought-out negotiations, compromises that do not harm any of the parties, and the respect of individuals among themselves, whatever their differences. Themis also has the mission to watch over the balance of natural forces and the universe: she ensures the regularity of the universe’s movements. And let’s remember that Libra is the astrological sign that marks the equidistance between day and night during the autumn equinox.

During autumn, between October and November, festivals and rituals were held in honor of Demeter, to thank her for the abundance of crops during the previous months. One of the most famous rituals is the Thesmophoria. Plutarch, a Greek writer, points out that this festival is dedicated to the autumn sowing to allow the seeds planted to grow in the warmth of the heart of the earth during the winter to bloom in the spring. And he adds that when, during this feast, the earth is turned over to dig it, or to plow it, one remembers those who are under the ground and this reference to the deceased will remain prominent during the winter season.

Demeter, the nurturing goddess, is celebrated in this intimate ritual of the Thesmophoria, where the words exchanged between women, far from their husbands, did not leave the women’s circles that they organized for this occasion. The nine days of this feast, associated to the nine days in which Demeter looks for her daughter Persephone, and understands where she is, had the purpose of depositing the intention of fertility for the fields and of fecundity for the women. During this event, the polarities of the masculine and the feminine merge: indeed, the women occupy the political space, they take the place of the men to hold assemblies under tents, installed on the hill of Pnyx, close to the temple of the goddess Demeter. The divinity watches, by this ritual, the perpetuation of the citizens by the fecundity of the women as by the fertility of the cultivated grounds to ensure food and prosperity to the men.

The goddess of agriculture, Demeter, associated with the presence of Themis, goddess of justice and order, but also with that of Opora, the goddess of autumn, gives a dimension of three voices to this ritual of Thesmophoria.

The Ancient culture is found at the heart of modernity in this season of autumn, playing an elegant score between harmony, balance, accuracy and gentle integration of light alongside the darkness, allowing us to find the symbolism of the autumnal equinox as well as the characteristics of the sign of Libra in the archetype of the Sacred Wife, who marries all the parts of herself by fully accepting them.