Home / Learn / The Meeting of the Divinities: In the wake of Persephone and Hecate 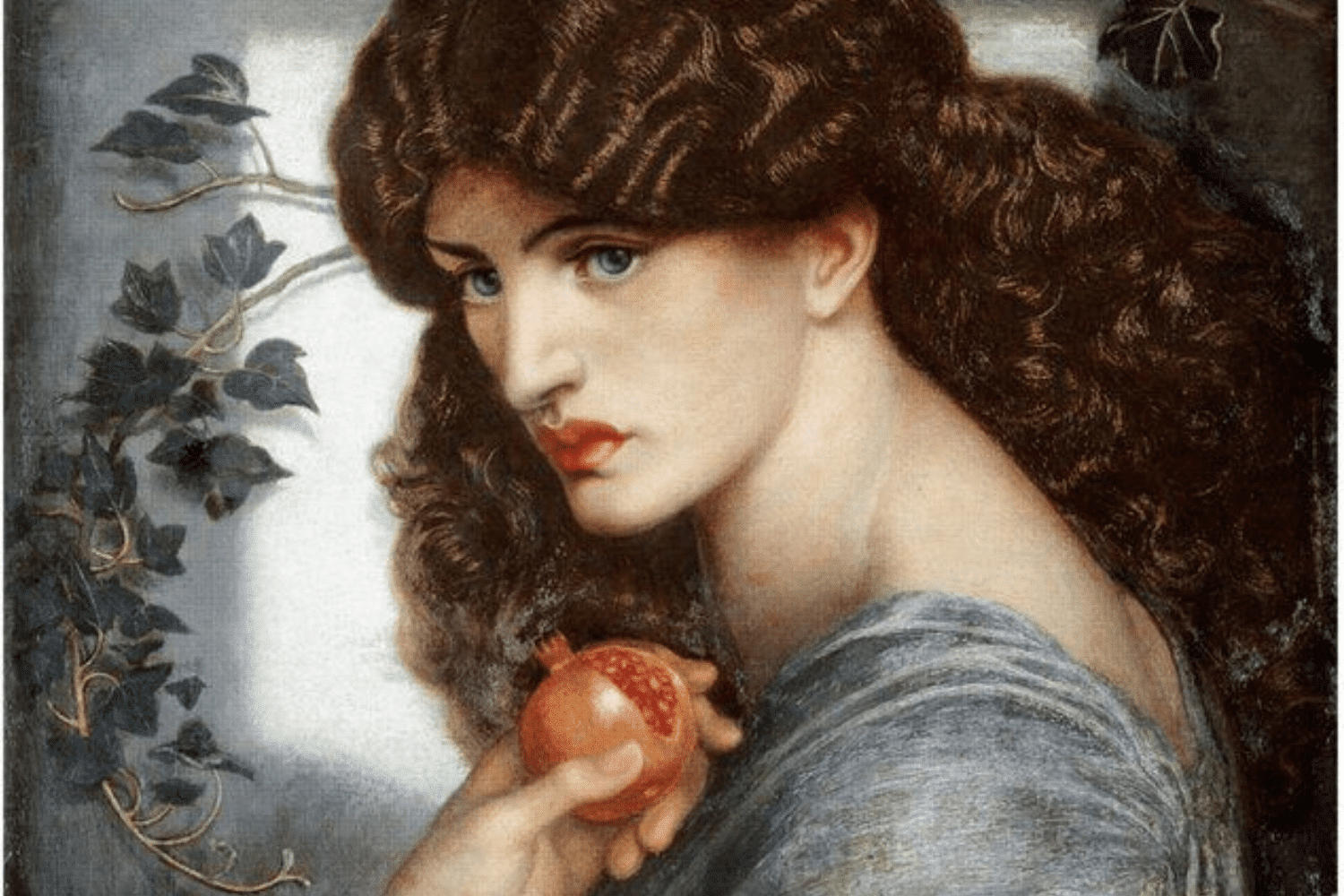 The Meeting of the Divinities: In the wake of Persephone and Hecate

The powerful portal of Samhain on the 31 October thinned the veils from one world to another, guiding us into six weeks of more intense darkness until the Winter Solstice.

The energies of this passage have led us towards the New Moon in Scorpio and an important Lunar Portal in this month of November, marked by mists, coloured by the first frosts and the first snows, tinged with spirituality and mysticism, as the Ancients already lived it by celebrating their deaths as a transitional passage towards a new year and a renewal. This Life-Death-Life cycle, very present and respected in Antiquity, is perfectly in line with what the Queen of Death archetype invites us to do, this Queen of Death that Alexandra Fryda Marty has presented and described to us as a companion during this season so that we may journey, that we may descend into ourselves, and that we may explore our darker parts and zones. A powerful will to shed light on what we don’t necessarily want to see or where we don’t want to go, with an open heart…

And yet, the Queen of Death has so much to show us, to teach us, and she has so much to make us give up for more levity, momentum and renewal, by making us transform, alchemize, our dark parts into luminous parts of ourselves at the end of the journey.

The ancients, in antiquity, had forged in their Mythology and Culture a cycle linked to the Witch-Magicians who were particularly honoured in those dark times in the heart of Autumn and in the passage to Winter, a season that is dark, bare and fallow, but a season that, underground, prepares for rebirth through the shoots that germinate in the warmth of the crucible of Mother Earth, ready to blossom in order to celebrate the renewal of the beautiful and luminous season of Spring.

In the previous article on Themis, we discussed the myth of Persephone who, kidnapped by the god of the Underworld, Hades, descends into the underground, leaving her mother Demeter.

The ancients explained in this way the cyclicality of the seasons between the bright, radiant and prolific seasons and the darker, less generous and more rigorous ones.

This descent into the underground world of the Underworld symbolises the Archetype of the Scorpion season, the Queen of Death, also called the Alchemist, the Magician or the Enchantress.

Indeed, the Queen of Death takes us by the hand and, with the help of her torch, leads us through the dark season as much as she helps us to cross our fears, our doubts, our anxieties, and to abandon our old baggage that has become too heavy, too cumbersome, and illuminating what we must leave or what must leave us in order to fully assume our sovereignty, our place, our legitimacy, just like Persephone, who, from being a young girl Korè in Greek, naive, candid, dependent on her mother, becomes through this episode Queen of the Underworld, taking her place alongside her husband, Hades.

Persephone even becomes a feared divinity. Her etymology testifies to this, and references to Greek poetry from the 6th century B.C. attest to this: she is the one who produces as much as the one who destroys. In Rome, she is Proserpine “the frightening”. She is even sometimes called Persephatta in Athens “who regulates destruction”, as the “structured disorganisation” of this death of Nature but who gives life again every year.

Persephone benefits from an anthropomorphism that makes her embody the young girl who becomes a woman at a certain point in her life and evolution. The pomegranate, a winter fruit, symbol of the Goddess, whose seeds she eats, makes her stay in the Underworld irremediable. The pomegranate, in ancient mythology, because of its red colour, is associated with female fertility and menstrual blood. Persephone’s fertility is enacted when she rises to the light in the spring, ensuring renewal after the winter germination. Thus, from innocent virgin, she becomes the initiated woman who knows the mysteries of darkness and death.

Behind the myth of catabasis, meaning the shattering descent in ancient Greek, is the message that Persephone, by the new situation she had to face, left behind her past, her naivety, and by descending into the depths of the Underworld, she found herself confronted with the depths of her psyche to look at her wounds, her dark areas, she saw what had been dug up in order to face them without looking away, and thus, to grow, to take responsibility, to reclaim her power in order to fully embody her sovereignty and assume her rightful place. The young girl became the woman who embraces herself and shines thanks to the gold she was able to obtain through the alchemy of her lead.

How can there not be a close link with the Great Hecate?

Ancient and mysterious Greek goddess, daughter of Titans, she is a pre-Olympian divinity, who embodies the Goddess of Death as much as the Witch-Magician or the Wise Old Woman associated with the last lunar cycle, when the first one is attributed to the young Persephone, the girl, the budding wheat, and the Full Moon, symbol of maturity, is associated with Demeter or even Selene, the ripe wheat.

Hecate remains inseparable from Persephone’s cycle; indeed, she is associated with the world of night, prowling in the world of the dead, preceded by the howling of her pack of dogs, which may appear in the animal form of a dog, a she-wolf or a mare. Hecate, the Guardian of the crossroads and of the three primordial directions, the Underworld, Heaven and Earth, is often represented as a three-headed woman with lighted torches in her hands, but also with a set of keys to open the door to the mysteries of life and death.

She is said to have witnessed the abduction of Persephone and to have shone her torch on Demeter as she went in search of her daughter. This is why Hecate is always very closely associated with Persephone: she precedes her when she enters the Underworld and follows her when she leaves, protector of the girl become assistant of the young woman, ruler of the Underworld.

Hecate possesses the same ambivalence as Persephone: she is both benevolent and scolding. Indeed, this divinity accompanies mortals with the light of her torches in the Underworld to show them the world of shadows, but she is also called upon in powerful incantations by the Witch-Magicians of Antiquity, such as Circe or Medea, for a power that can prove evil. Lilith is a version of Hecate with the ululating owl also associated with her.

This very close link between Persephone and Hecate, between the phases of the moon, the different ages of life and this mythological episode of the abduction of the young Goddess, is reinforced in the woods of poplars and white willows where they meet or where they are honoured.

The willow, particularly associated with the feminine and lunar rhythm, is in ancient Greek a tree of the feminine gender, linked to water, as it likes to flourish on the damp banks of lakes and rivers as well as in water-logged meadows. Its wood is highly prized both in herbal medicine and in magical use, used in healing rituals, to protect against evil, and very often, ancient Witch-Wizards made their brooms from a willow branch, which is why the willow wand is found in the hands of several characters in the Harry Potter saga.

The willow is a tree that allows you to see clearly, to better feel the messages conveyed by intuition, emotions or dreams, and to increase the power of ideas.

Both Hecate and Persephone are the [phosphoroi], the bearers of light in Greek, the “phosphorescents”, the scouts, to cross the darkness of the underworld, the penumbra of the world of the dead, of the kingdom of darkness, without being afraid of this darkness but learning to tame it as a symbol of going through one’s fears by facing them without fear, by confronting them and growing through them.

Moreover, in ancient mythology and literature, the heroes have an obligatory passage in their initiatory journey of catabasis because this descent into the Underworld allows them to rub shoulders with the dead, who have messages of wisdom and wise advice to give them, in order to participate in their maturity and personal accomplishment, whether it be Odysseus, Heracles, Orpheus, Aeneas…

We then understand how Persephone is linked to the Queen of Death archetype through her power of transmutation by having the ability to untie the ties that tied her too tightly to her world as a dependent and fragile young girl, to an assigned place that was just waiting to blossom into real existence without remaining in the shadow of more mature and recognized Divinities.

We can see the obvious link between ancient mythology and modern life, where each young being needs to take flight and become who he or she really is and wants to be, flying with his or her own wings.

Persephone went through the fire of the initiatory ordeal, she became aware of what was happening to her and absorbed the quintessence of it in order to draw from it a transforming force to become a Woman, Guardian and Mistress of the Underworld, without anyone to stand in her way.

Persephone offers us a life journey full of depth, intensity, power, richness and also mysterious complexity; indeed, some mythological versions do not take Persephone from the point of view of the young girl who is surprised and frightened by Hades but who, driven by her curiosity, goes to the end of the experience with a view to detaching herself from the overly oppressive protection of her mother…

Persephone, in her ambivalence, in her duality, invites us to find the strength and the capacity to make the old die, to say YES to the liberation of certain bonds, of certain conditionings that have become unsuitable, of certain imposed beliefs, and of certain habits that reassure as much as they lock up and prevent…

Persephone, strongly connected to the Queen of Death, understands and celebrates the cycles of life as well as its mysteries. She proposes to enlighten us in this descent into ourselves, into our depths, into our entrails…

Let her guide and accompany us, let her illuminate us with her torch, her light, her knowledge, and let her reveal us to ourselves.